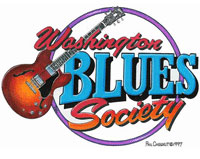 This is one of the most solid blues albums I have heard in awhile: every one of the ten original tracks on Playing the Game is a keeper. Kevin is an expert showman too, as we witnessed at a recent Washington Blues Society Blues Bash, and that energy comes across in his recording as well. Just as he did at the Bash, Kevin mixes it up, playing multiple styles of blues with varying amounts of intensity.

With so many great tracks on Playing the Game the hardest part in writing about them is picking only a few. I will start with the title track which has a thick groove provided by the rhythm section, Allen Markel-bass and Don Shultz-drums leaving Kevin a solid foundation for his inspired guitar solo. Allen’s bass playing deserves special recognition, the only way a three piece band can sound this good is to have an outstanding bass player and Allen fits the bill. For an excellent example just listen to tracks like ‘Just Like Pulling Teeth” with thundering bass, the popping old school bass lines on “Walking Funny” or the subtle work on “Pulled Pork” and you will find the rich bass work that is at the core of the music driving the melodies allowing Kevin’s deft guitar playing to float above or sting like a hornet. Kevin’s vocals don’t take a back seat either from purr to growl and all points in between his vocals add just the right edge to every song.

Catch the band live and take home a copy of Playing the Game. This CD is very highly recommended.