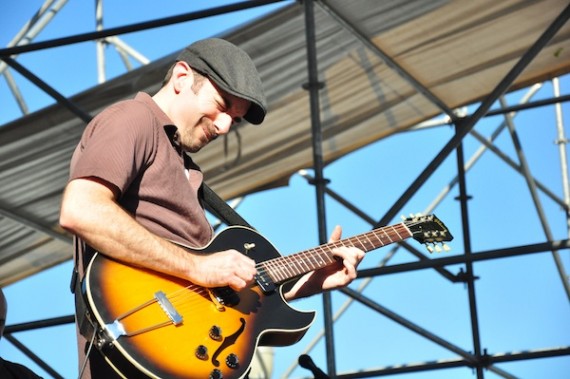 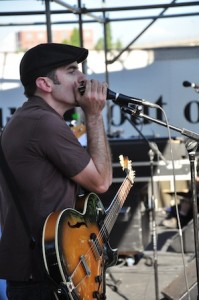 I’m pretty sure there’s only three people on stage. I can see Jimi Bott on drums, Allen Markel on Bass and Kevin Selfe swinging a guitar. Yep – only three bodies. But man – the sound coming from these guys is worth about twenty. How am I supposed to be writing about this guy when all I can do is jump around. Being a writer is difficult at times.

Selfe, as I mentioned in an earlier article, could have gone into meteorology. A weatherman. I’m sitting here, thanking my good fortune that he decided in favor of the guitar. Although it would have been fun to watch him do weather reports. I’m picturing him doing a report about thunderstorms, jumping on the stage, blowing a harmonica, etc. There’d be a weather report to be remembered. 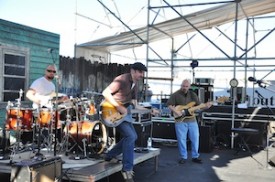 Oh – and there’s those other guys on stage. Jimi Bott plays drums like, like, I’m at a loss for colorful analogies. The guy has an inescapable pocket – I dare you to play outside of the beat. I suspect I could listen to his extended drum solos – and find something new with each phrase. Blues drummer wanna-bees take note of his vocabulary – it’s the right phrase, at the right time. None of those fancy triple-beats – unless it’s absolutely the right thing to do at the time. He’s got dynamics – the soft hits make you lean in, only to desire the strong beat that shows up shortly after. Bott plays the drums like an instrument, rather than just a bunch of paint buckets. 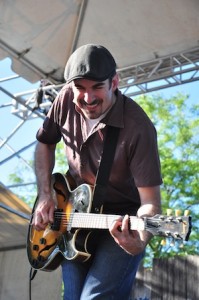 I’m a bass player, and I’m pretty sure I could lay down a convincing blues riff with Bott at my side. I mean, really, how could I not? So it’s no surprise that Markel provides a killer bass line. But I’m not dissing Markel – he knows how to play a bass like Bott plays drums and Selfe plays a single-extended-note on the harmonica. He’s deep in the pocket with Bott, and knows what’s being called for. You may not know this, but he’s in charge of keeping your feet moving. The syncopated rhythms coming off his four strings lay out a dance step that couldn’t be any clearer than if you had painted footsteps on the floor. The bass is nothing more than a drumset with strings, and Markel knows how to use it.

Selfe is an award winner – and deserves every gold-plated medallion he’s got on his fireplace mantle. If this is the first day of the festival, we’ve got a lot of good stuff ahead of us!

OMN is proud to be a media sponsor of the 2011 Safeway Waterfront Blues Festival and to help support the Oregon Food Bank.