Browse: Home / 2011 / November / Kevin Selfe and The Tornadoes to back up Kirk Fletcher on NW Tour!

Kevin Selfe and The Tornadoes to back up Kirk Fletcher on NW Tour! 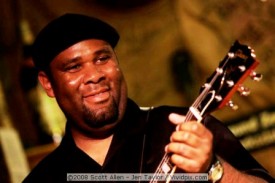 Kevin Selfe and The Tornadoes are excited to announce that they will be backing up 2-time Blues Music Award nominee Kirk Fletcher on a mini NW Tour!  Kirk spent years touring with the Fabulous Thunderbirds, Lynwood Slim, Janiva Magness, and Charlie Musselwhite, is a member of the All-Star group The Mannish Boys, and is considered one of the best young guitar players on the blues scene today.   Kevin Selfe and The Tornadoes are a 3 time Muddy Award winner for Blues Act of the Year, and the only band in the 23 year history of the awards to win for both Contemporary and Traditional Blues Act.  This will be a special tour as Kirk will be reunited with former Fabulous Thunderbirds drummer Jimi Bott!   The tour consists of the following dates at some of the finest blues venues in the NW:

Born 1975 in Bellflower California, Kirk began playing guitar at age eight after watching his brother Walter perform at their father’s church. At age twelve he attended the Long Beach Blues Festival where he saw the likes of Albert Collins, Bobby Blue Bland, (accompanied by Wayne Bennett) and the Staple Singers. This was a life changing experience for him as he realized that this was the music he wanted to play.

While still in High School he discovered a small but legendary Los Angeles music store called Music Works, where he met owner Jim Foote, “Meeting Jim was invaluable in my search for tone and a better understanding of the mechanics of the instrument, and it was a very cool scene to be a part of….that’s how I met Jeff Rivera, who at the time was Robben Ford’s guitar tech. I got to assist him and be a fly on the wall to some of the most amazing musical events of my life up to that point….and it heightened my musicianship!” During this time he performed with R&B artist Christopher Williams and was playing gospel weekly at The House of Blues, with Brent Jones & The T.P. Mob, where he also shared the stage with such artists as Stephanie Mills and Jackson Browne.

In the Mid 90’s Kirk met Al Blake, frontman of the Hollywood Fats Band who became a mentor to the young guitarist. Blake introduced him to wide variety of  blues music,“Al hipped me to blues artists as diverse as The Mississippi Sheiks to Tommy Johnson…we’re talkin’ pre Robert Johnson stuff…that’s how far back we went..!” and it was through Blake he also met and bonded with guitarist Junior Watson, “Junior and  I would get together smoke cigars, drink tequila and talk guitars…”

Around this time Kirk met and sat in with harmonica legend Lynwood Slim, “I’m grateful to Slim for giving me a stage to play on…” and it was then that Kirk released his first solo effort “I’m Here & I’m Gone”  for the JSP Label. “It gave me a chance to pay tribute to my influences and to establish my solo career”. Kirk’s reputation was growing amongst harp players around town, and through an introduction, again, by Al Blake, Kirk sat in with Kim Wilson, and about a year later, got a call to join Kim Wilson’s Blues Review. “I played on and off with Kim for over 2 years….when he wasn’t working with the T-birds”, with the results being the Grammy nominated album “Smoking Joint” .

In 2003 Kirk recorded his second album “Shades of Blue” and it brought him even greater attention in the blues community, “Charlie Musselwhite found out about me through blues musician Doug MacLeod……,Charlie needed a guitar player and called me”, this gig was special for Kirk, “He gave me the freedom to find my voice on the guitar”. He spent three years touring with Charlie and feels that this is where he developed his unique style.

A year later, after another call from Kim, he joined The Fabulous Thunderbirds, where he contributed to and recorded on their “Painted On” album. “I made lifelong friends in Nick, Ronnie, Jimi, Steve and Gene”.  In 2007 he gave notice in order pursue his solo career, and this is when he met up with legendary guitarist and producer Michael Landau. “ We first played together at the Baked Potato in L.A., quickly became friends and really connected musically”.

In recent years Kirk has been performing all overEurope as a headliner and occasionally touring in theU.S. with Doyle Bramhall and Michelle Branch. When home, he gives open counseling atHollywood’s Guitar Institute of Technology.Currently he’s ready to release his third solo album, “My Turn”.