Browse: Home / 2012 / March / Kevin Selfe and The Tornadoes to back up Mitch Kashmar!

Kevin Selfe and The Tornadoes to back up Mitch Kashmar! 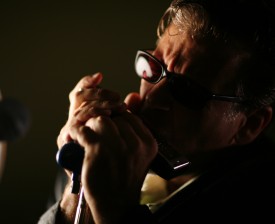 Kevin Selfe and the Tornadoes are excited to announce they will be backing up Delta Groove recording artist, former harmonica player with WAR, and two time Blues Music Award Nominee, Mitch Kashmar!  They will be performing at the legendary Highway 99 Blues Club in Seattle, WA on Saturday, April 28th.  For show information please visit: http://highway99blues.com/

Noted by his peers as one of the most soulful and powerful blues singers in the business today, Mitch Kashmar has shared the stage with some of the most influential blues musicians including John Lee Hooker, Big Joe Turner, Eddie ‘Cleanhead’ Vinson, Lowell Fulson, Jimmy Witherspoon, Pee Wee Crayton, Johnny Adams and many others. 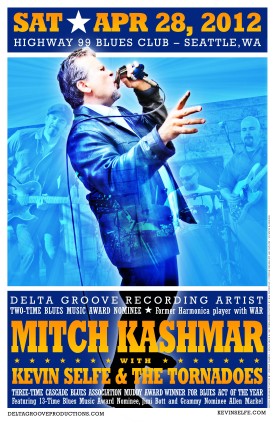 So, it was an honor, yet no surprise, for Mitch to be invited to perform at the 9th Annual Edmonton’s Labatt Blues Festival in Western Canada in August 2007. Blues fans throughout Canada witnessed Mitch Kashmar and his band in action at the festival. And fortunately for blues fans elsewhere in the world, the event was captured for posterity by the Canadian Broadcasting Corporation and released by Delta Groove Music. Joining Kashmar at this festival performance are former bandmate from the Pontiax, drummer Tom Lackner, bassist Steve Nelson, pianist Jimmy Calire, and former William Clarke guitarist, John Marx, providing the perfect foil to Kashmar’s dynamic harp playing and emotive vocals.

“Mitch Kashmar is my absolute favorite blues harp player of his generation, and one of my favorites period! He’s also a first-class vocalist – his singing really knocks me out.” – William Clarke

While still attending high school, Mitch began sneaking into his first gigs with local bands in Santa Barbara using his brother’s ID. By 1980, he formed his own group, The Pontiax, continuing to perform throughout the Santa Barbara and Southern California region. Around the mid-80s, Mitch made the move to Los Angeles and The Pontiax recorded “100 Miles to Go” for the Belgium label, Blue Sting Records. They soon went out on the road expanding their fan base globally with tours throughout the US, Canada, Europe and the South Pacific.

The musical styles of The Pontiax drew on a wide range of influences including Chicago Blues, New Orleans R&B, West Coast Jump Blues and Swing, Boogie Woogie, Louisiana Swamp Rock, Texas Blues and straight forward Jazz. The Pontiax also became very popular within the music community being called into action on stage as back up band with many legendary blues musicians such as Albert Collins, Charlie Musselwhite, Luther Tucker, Pinetop Perkins, William Clarke, Kim Wilson, Roy Gaines and many of the aforementioned artists.

“Mitch was only 19 when I first heard him and he sounded good even then.
These days, oh man, is he tough!” – Kim Wilson of the Fabulous Thunderbirds

Mitch’s blues harp playing is second to none for creativity, drive and excitement. And he’s also just as witty and imaginative in the role of songwriter. He’s shared the stage with some of the biggest names in blues over the years with Stevie Ray Vaughan paying him the ultimate compliment given from one musician to another: “Can I sit in?”

Moving on to a solo career recording “Crazy Mixed-Up World” in ’99, Kashmar started making a name for himself and touring with his own band but it wasn’t until his 2005 effort “Nickels & Dimes”, featuring guitar great Junior Watson on Delta Groove Music’s label, that his stock really began to rise. Kashmar was recognized two consecutive years in a row by the Blues Music Awards with nominations in 2006 as Best New Artist Debut and followed in 2007 as Best Instrumentalist – Harmonica.

When taking a break from his solo career, Mitch has also signed on for active duty with the latest touring incarnation of the classic 70’s funk-rock band War, and even made rock ‘n’ roll history appearing onstage alongside legendary British rocker Eric Burdon & War for a reunion concert held on April 21, 2008 at London’s Royal Albert Hall.

Mitch Kashmar has come a long way since his youth in what is now often perceived as the quaint beachside community of Santa Barbara, CA. They’ve all known what the rest of the blues world is about to find out: Mitch Kashmar is a force to be reckoned with in the blues.