Kevin Selfe and The Tornadoes headed to Montana!

We are excited to announce that we will be heading to Montana! We will be playing two different blues festivals coming up in mid August. On Friday, August 10, we will be headed to Libby, MT to play the 4th Annual Riverfront Blues Festival. Others on the bill include Lisa Mann, Vicki Stevens, Nick Vigarino, […]

END_OF_DOCUMENT_TOKEN_TO_BE_REPLACED 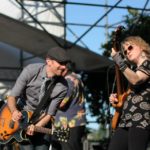 25th Annual Safeway Waterfront Blues Festival, Portland, OR, July 4th, 2012 – One of the biggest shows we\’ve ever played, in front of a huge crowd (30,000 people!)…and was probably the most fun I\’ve ever had playing music! We had the big band consisting of Jimi Bott, Allen Markel, Joe McCarthy, Chris Mercer, Brad Ulrich, […]