Kevin Selfe and The Tornadoes take home four Muddy Awards, inducted into the Hall of Fame! 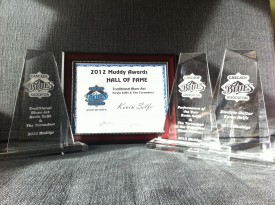 On November 1, the Casacade Blues Association held its 24th Annual Muddy Award ceremony in Portland, OR.  Kevin Selfe and the Tornadoes were big winners for the night bringing home Muddy Awards for Traditional Blues Act, Electric Guitar, Drums, and for Performance of the The Year for their big band set at the 2012 Waterfront Blues Festival.  This is the third year in a row the band has been honored for Traditional Blues Act of the Act, which means they have been inducted into the Cascade Blues Assiociation Hall of Fame!   Congratulations to all the winners and nominees, as well as a big thank you to the CBA for keeping the blues alive and well.  Here is the full list of winners: