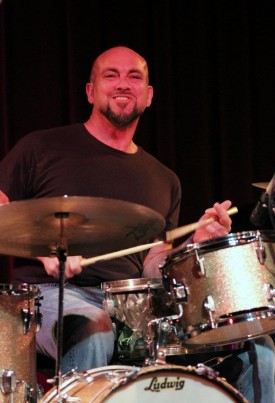 We are very excited to announce our drummer Jimi Bott, has been nominated for his 14th Blues Music Award by the Blues Foundation in Memphis, TN!

Although this is his 14th nomination, Jimi has YET to bring home the award.  That is 14 nominations in the 18 years there has been a drummer category, and 12 in a row.  His 14 nominations now make him the MOST nominated drummer in the history of the awards!  That is more nominations than legendary drummers, Willie “Big Eyes’ Smith (Muddy Waters) and Sam Lay (Howlin Wolf, Little Walter, Muddy Waters). But yet a lot of people still do not know who he is. My purpose of this is not necessarily to get you to vote for him, even though he truly is one of the most talented, deserving, and humble musicians around.  It is to bring awareness of who he is and what he has done, for those of you who might not be familiar with him, so you can make an educated choice when it does come time to vote.

Jimi has one of the most impressive resumes around as he has spent nearly three decades touring the world with The Fabulous Thunderbirds, The Mannish Boys, Rod Piazza, and Mark Hummel.  He has over 70 recordings to his credit including William Clarke, Billy Boy Arnold, and James Harman.

To hear a sample of Jimi’s recording with 2013 BMA Nominee The Mannish Boys, visit
http://www.deltagrooveproductions.com/music/releases/doubledynamite/audio.html

With Kevin Selfe and The Tornadoes, at the Alberta Rose Theater, Portland, OR, May 2012
https://www.youtube.com/watch?v=YkNmNmRb89c

With Honey Piazza at the Simi Valley Cajun and Blues Festival, May 2012
https://www.youtube.com/watch?v=NASw64i78n0

With Janiva Magness and The Mannish Boys at the Simi Valley Cajun and Blues Festival, May 2012
https://www.youtube.com/watch?v=MlSgZSefG00

Here is a list of all the people Jimi has performed or recorded with…just THIS year. Names in bold are 2013 BMA Nominees:

So, if you have a moment and are a Blues Foundation member, please take the time to consider Jimi for your vote.  If you are not a member yet, please consider joining the Blues Foundation by visiting www.blues.org   Your membership really does a lot to keep the blues alive!

Thank you so much for your time and consideration,