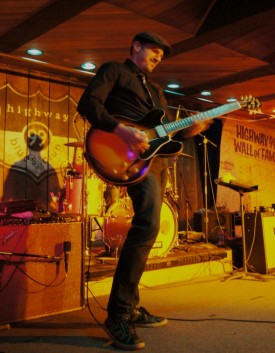 Kevin Selfe has been electrifying audiences nationwide since breaking into the blues scene in 2006.    His growing stature as a captivating story teller and passionate performer are surpassed only by his deft mastery of blues guitar.   Having relocated to Portland, OR, the Virginia native is now a leading light in the Pacific Northwest’s robust blues revival.  Effortlessly combining the guitar traditions of the legends and the modern masters into his own unique approach, Selfe’s stylistic depth and electric performances resonate with audiences.  His live shows have grown in legend largely due to his unique gift for communicating, through guitar, the complex range of moods revealed only by blues.   Selfe’s songwriting style bridges the gap between joy and angst, using piercing irony, humorous metaphors, and daring autobiographical subject matter from his own occasional walks with the blues.

“Great jumping up and down Blues Boy and smack me upside the head this album is phenomenal!” ~ Greg Johnson, President Cascade Blues Association, February 2013