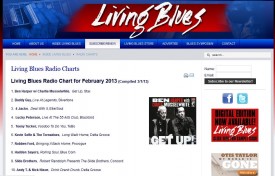 Very excited to announce that our new CD on Delta Groove “Long Walk Home” has debuted at #6 on the Living Blues Radio Charts for February 2013.

Founded as America’s first blues publication in Chicago in 1970, Living Blues magazine has set the standard for blues journalism around the world.  Each issue also contains the Living Blues Radio Charts providing the music industry with one of the most accurate compilations of playlists from blues radio programmers throughout the world.

Thanks to all the DJ’s around the world who have been spinning the CD, and have helped make this happen!