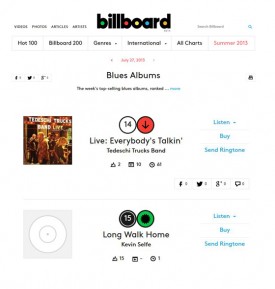 “Things are heating up in the Pacific Northwest for guitarist Kevin Selfe with the recent news of his Delta Groove debut “Long Walk Home” landing him at the #15 spot on the Billboard Blues Chart. Selfe’s CD was released earlier this year in February to enthusiastic reviews and steady airplay rotation. “Long Walk Home” charted #6 on the February Living Blues radio chart listings and also peaked at #13 on the Root Music Report’s national radio airplay blues charts. All of us here at Delta Groove would like to extend our congratulations to Kevin on his latest outstanding achievement. Billboard blues chart positioning reflects sales activity for the week ending July 27, 2013.”