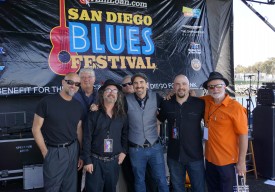 Two Time Muddy Award Winner for Performance of the Year

What do you get when you add together a super tight horn section reminiscent of the Stax years, a barrelhouse piano player straight out of New Orleans, a Grammy nominated bass player, one of the world’s greatest drummers, and a Cascade Blues Association Hall of Fame guitar player? You have all the ingredients for an epic night of world class blues music with Kevin Selfe and The Tornadoes Big Band at Duff’s Garage in Portland, OR. This supergroup is coming off a scorching performance at this year’s San Diego Blues Festival, and won prestigious Muddy Awards for Performance of the Year at Portland’s Waterfront Blues Festival two years in a row. The band features Kevin Selfe – guitar, vocals, Jimi Bott (Fabulous Thunderbirds, Mannish Boys, Rod Piazza) drums, Allen Markel (Insomniacs) bass, Joe McCarthy (DK Stewart) trumpet, Chris Mercer (John Mayall, Freddie King) tenor sax, Brad Ulrich (Duffy Bishop) baritone sax, and Steve Kerin (Atomic Gumbo, Too Loose Cajun Band) on keys.

Kevin Selfe has been electrifying audiences nationwide since breaking into the blues scene in 2006. His growing stature as a captivating story teller and passionate performer are surpassed only by his deft mastery of blues guitar. Having relocated to Portland, OR, the Virginia native is now a leading light in the Pacific Northwest’s robust blues revival. Effortlessly combining the guitar traditions of the legends and the modern masters into his own unique approach, Selfe’s stylistic depth and electric performances resonate with audiences. His live shows have grown in legend largely due to his unique gift for communicating, through guitar, the complex range of moods revealed only by blues. Selfe’s songwriting style bridges the gap between joy and angst, using piercing irony, humorous metaphors, and daring autobiographical subject matter from his own occasional walks with the blues.

In seven years Kevin Selfe and The Tornadoes have become a fan favorite in the Northwest and beyond. In August 2013, Kevin was nominated for a Blues Blast Award, and the band was inducted into the Cascade Blues Association Hall of Fame in 2012 for Traditional Blues Act. In addition, Kevin was inducted into the CBA Hall of Fame for Electric Guitar in 2014 . They’ve won 18 prestigious Muddy Awards from the CBA for Traditional Blues Act of The Year (2010-2014), Contemporary Blues Act of The Year (2013, 2009), Performance of the Year (2013, 2012), Electric Guitar (2012-2014), Drums (2011-2014), NW Recording of The Year (2013), and National Recording of The Year (2013). They are the only act in the 25 year history of the awards to win for both Traditional and Contemporary Blues Act of the Year demonstrating their musical diversity and depth.