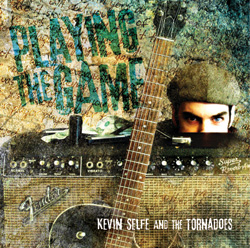 “There were six entries submitted to the Cascade Blues Association this year to be considered for our organization’s representative in The Blues Foundation’s Best Self- Produced CD competition. Held annually in Memphis during the International Blues Challenge, the CBA has previously entered four discs in the contest’s four year history, including Joe McMurrian’s “Rain Of Days” which landed in the five finalists in 2007

The six submissions to the CBA this year were: Boogie Bone “Bone-a-fied!,” David Brothers “Corn Flakes & Gin,” Steve Cheseborough “Fetch It!,” Eddie Courduroy “My Riverside,” Kevin Selfe & The Tornadoes “Playing The Game,” and the Rick Welter Band “I’m All Yours.”

A panel of four Board Members met on a Sunday morning to listen closely to the six offerings. A scoring system based closely on the International Blues Challenge Judges score sheets were used, with weighted scores based on a 1 – 10 scale with 10 being the best. The five categories weighed were Blues Content (X4), Originality (X4), Sound (X3), Talent (X3) and Artwork (X2).

The scores for all the discs were close, but in the end the judges’ scores revealed the CD that will be entered to The Blues Foundation will be Kevin Selfe & The Tornadoes’ “Playing The Game.” From here, there are two rounds that’ll drop the number of discs submitted by associated Blues societies from around the world to five finalists. Then during the IBC, a panel of top record label people will gather to listen to the final five and select this year’s winning CD.

Thanks to all the entries this year and good luck to Kevin and the guys in Memphis.”