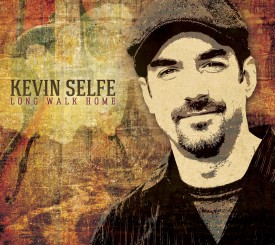 Last May I was standing in the lobby of the Marriott Hotel in Memphis during the Blues Music Awards week, when Kevin Selfe walked up to me and handed me a copy of a new CD he was trying to find a label interested in releasing. Scanning over the credits on the disc I was quite enthused and could hardly wait to throw it onto my player. And when I did . . . Great jumping up and down Blues Boy and smack me upside the head this album is phenomenal! I just knew it wouldn’t be long before somebody wisely picked this one up.

Jump ahead two months. Kevin & The Tornadoes had just completed a stellar set at the Waterfront Blues Festival featuring many of the same cats from the new album onstage with them. I was sitting in the VIP area with Tornadoes bassist Allen Markel and his wife Lisa Mann as I noticed Kevin across the way in conversation with Delta Groove boss Randy Chortkoff. Kevin soon walked over with a grin on his face. “You just got signed, didn’t you?” I asked him. He didn’t need to say anything. By the way his face lit up even more I knew he had. And why not? A good portion of those appearing on the album, like Mitch Kashmar, Gene Taylor, Doug James and even Tornadoes drummer Jimi Bott had all been on Delta Groove releases in the past. It was a natural fit with its traditional blues flavored by a little West Coast flair.

Long Walk Home, is by far the finest moment in Kevin Selfe’s songwriting abilities yet. The guest artists are a nice touch, but in reality it is the core group of The Tornadoes, Kevin with Allen and Jimi, that make this all come to life. The tracks are filled with gritty down home guitar work, that takes you to the swamp or to the back alleys and even a little resonator thrown in for good measure. You can sense the Louisiana bayou come through on something like “Midnight Creeper” or “Too Much Voodoo.” You can feel the impact of Elmore James and Hound Dog Taylor on the slide piece “Put Me Back In Jail.” The pulsations of “Duct Tape On My Soul” and “Mama Didn’t Raise No Fool” delivers prime Kevin Selfe creations that have been developed for some time in his live performances. And his writing also makes you wonder about his luck with the opposite sex as he relates tales of the woman who breaks up after having him pack her things and moving her into a new home (“first you broke my back, then you broke my heart”) on “Moving Day Blues,” the “Dancing Girl” who shakes it with all those guys right in front of him while he plays, a little bit too provocative for his taste, and the girl who shows up after he’s been waiting for her to come home all night long whose clothes aren’t on just right and she’s “Walking Funny.” The stories are first class and blues through and through.

The band is also enhanced by the sensational horn parts arranged by Joe McCarthy. Some of these pieces have long been in Kevin’s songbook, like “Moving Day Blues” and “Walking Funny.” But they take on even more life with the brass added, courtesy of Chris Mercer, Brad Ulrich, Peter Moss, Doug James and McCarthy. Mitch Kashmar’s harp on “Mama Didn’t Raise No Fool” has that same impact, as does the keyboard work by Steve Kerin and Dover Weinberg in their appearances on the disc.

This is an album sure to be counted as one of the best Northwest releases of the year, and perhaps even amongst the best everywhere. Kevin Selfe & The Tornadoes work endlessly throughout the region all year long; but with Long Walk Home I predict we going to see a lot less of the guys as they will be in demand far outside of the area once people get the taste of this release. Excellent is only a mild term when describing this masterful work. Bravo Kevin Selfe!

Total Time: 50:09
Duct Tape On My Soul / Mama Didn’t Raise No Fool / Moving Day Blues / Last Crossroad / Dancing Girl / Midnight Creeper / Walking Funny / Too Much Voodoo / Second Box On The Left / The Blues Is My Home / Put Me Back In Jail