Sugaray Rayford to join Kevin Selfe and The Tornadoes for NW Tour! 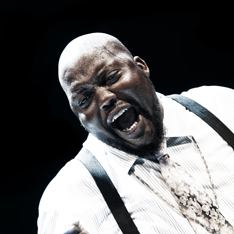 Delta Groove Recording Artist and lead singer of The Mannish Boys, Sugaray Rayford, joins Cascade Blues Association Hall of Famers and labelmates Kevin Selfe and The Tornadoes for NW Tour!  Stops include Duff’s Garage in Portland, OR on Thursday, October 24; Sapolil Cellars in Walla Walla, WA on Friday, October 25; and at Highway 99 Blues Club in Seattle, WA on Saturday, October 26.

When Sugaray belts out a song, you not only hear it, you feel it. The excitement in the room is palpable when he takes the stage; he is a superb vocalist and entertainer. His dynamic voice is large just like the man. With his old school vocal style, echoes of Muddy Waters, Otis Redding and Teddy Pendergrass can be heard. At 6’5″ he is a big man, but he moves with grace and energy. His fluid dance steps will remind you of the Legendary James Brown.

Texas born Caron “Sugaray” Rayford began his musical career as a young boy singing & playing drums in church. His gospel influence can be heard and felt in his music. Rayford’s phrasing is intimate and conversational and the soulful gravel in his voice hints at his firsthand experience with hardship. He grew up in Texas, his childhood marked by poverty and loss. He remembered a sad game he played with his brothers, a competition that determined who was skinniest by counting the number of belt holes left unused. His mother struggled to raise three boys alone while battling cancer. When she died, it was a kind of relief. “She suffered and we suffered,” Rayford said. “Then, we moved in with my grandmother and our lives were a lot better. We ate every day and we were in church every day, which I loved. I grew up in gospel and soul.”

After performing in bands that leaned more towards modern sounds for a few years, Sugaray found him self drawn more towards the power of the blues, and led San Diego band Aunt Kizzy’z Boyz to a second place finish at the International Blues Challenge in Memphis in 2006. This turned into a big win for Sugaray though, as it brought him to the attention of Delta Groove Productions head Randy Chortkoff. A few years later when Delta Groove’s Mannish Boys were in need ofa featured front man to add to the rotating cast of talent, Sugaray was brought in for a few shows. The chemistry was solid and immediate – his powerful and dynamic performances pushed the band to new heights, and the bond was sealed. His work as a featured vocalist under the Mannish Boys umbrella, both live and on their “Double Dynamite” release, made it abundantly clear that he was not only deserving of his own Delta Groove release, but that it was inevitable. So the wheels were put in motion to surround him with the best and most musically compatible blues talent available.

“Dangerous” represents a cross section of classic and contemporary, originals and seldom-heard covers, all representing the truth at the core of Sugaray’s blues soul. From the Son House classic “Preaching Blues” and post-war gems from Junior Parker, Gatemouth Brown and Pee Wee Crayton, to well-honed originals like Sugaray’s own “Stuck for a Buck”, “Need a Little More Time” and “I Might Do Somethin’Crazy”, it’s all killer, no filler. Supporting Sugaray is an all-star cast that includes Franck Goldwasser, Willie J. Campbell, Randy Chortkoff and Jimi Bott from the Mannish Boys, plus special guests Kim Wilson, Monster Mike Welch, Big Pete, Kid Andersen, bass man Bill Stuve,
veteran pianists Anthony Geraci and Fred Kaplan, and the only other Sugar Ray available (outside of the boxing ring, anyway), powerhouse vocalist and harp master Sugar Ray Norcia. Of special note is the duet Norcia wrote especially for the occasion, appropriately enough, “Two Times Sugar”. So although Sugaray Rayford may be a new name to some, he’s definitely no overnight sensation, or this season’s ‘next big thing’ – he’s here to stay, right where he belongs.