Browse: Home / 2014 / November / Kevin Selfe and The Tornadoes receive Three 2014 Muddy Awards, Kevin is inducted into the Hall Of Fame!

Kevin Selfe and The Tornadoes receive Three 2014 Muddy Awards, Kevin is inducted into the Hall Of Fame! 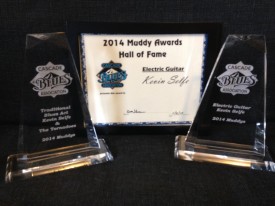 We are excited and honored to announce that we have received three 2014 Muddy Awards from the Cascade Blues Association in a ceremony in Portland, OR on November 5.   We took home awards for Traditional Blues Act, Electric Guitar, and Drums.   Kevin was also inducted in the the CBA’s Hall of Fame for Electric Guitar.  And since this was Jimi Bott’s 12 Muddy Award for drums, he has retried himself form the category and from now on the award will be known as the “Jimi Bott Drums” Muddy Award.  Thank you CBA members, fans, and blues lovers for all the support and the inspiration…we wouldn’t be here with out you!!!